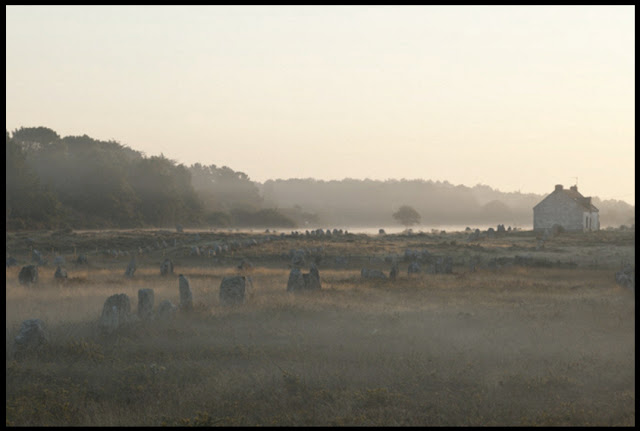 The Carnac stones are a collection of megalithic sites around the French village of Carnac, in Brittany. It consists of more than 3,000 prehistoric menhirs and erected by the ancient, pre-Celtic people residing in the region (1).

Many theories abound the stones at Carnac. Their apparent mystery and far-reaching history align them more in the realm of folklore and legend than archeology. Many people have speculated their origin, and reason of existence. Consequently, a long slew of superstitious and fantastic visions have come to surround the Carnac menhirs. One such myth derives their origin from Saint Cornelius. As the story goes, an entire Roman legion was in pursuit of Cornelius along the hillside of Carnac. Desperate to survive, he conjured the power of Christ, (a few hundred hail marys may have done the trick) he transformed the legion into stone where they remain still. Another variation of the tale involves the same Roman legion but instead of Saint Cornelius, Arthurian legend takes hold, and now Merlin acts as the Medusa, casting a spell upon the legion (2). 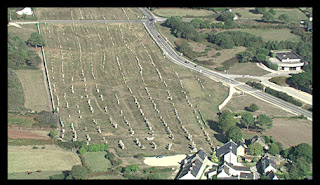 In truth, the Arthurian variation holds a bit more weight, if only in that the history of the stones and their present formation certainly dates back to pre-Christian times, likely around 3300 BC, though the exact age of the site remains in question(3).
Considered by many as "fields of remembrance" serving to mark a border, as much physical as mental, the Carnac Alignments continue to pose an archaeological conundrum for scientists.
The idea of a temple in ruins, which emerged in the 19th century, has been gradually rejected. A recent proposition suggested it was a site of "passage", a threshold, marking the gateway between two spaces, two worlds.        Perhaps, their purpose is funerary, although little evidence has been unearthed to support this claim. A ceremonial processional way for druids and practitioner's of ancient religions may be more likely. While others hypothesize their purpose may have been to appear as an army of soldiers from a distance, thus frightening away any approaching threats, or the field itself was a trap to aid in hunting or defense. Yet, another theory, in 1887, proposed by H. de Cleuziou, argued for a connection between the rows of stones and the directions of sunsets at the solstices (5).
A modern-day researcher, Howard Crowhurst, expands on this theory of the stone’s celestial arrangement and compounding it with the significance of the inherently sacred geometry of the stone’s placement. One can find his lecture Megalithmania, here.
And, of course, any ancient and mysterious structure’s list of potential origins and purposes would not be complete without a few alien theories, as seen on a documentary promoted by the History Channel. 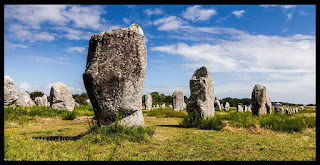 Purpose aside, the most puzzling question surrounding the Carnac stones is how ancient peoples were able to wield the menhirs as the site spans two miles and some of the stones weigh over 350 tons.
Fortunately, unlike many places of historic value, the Carnac Stones are now preserved as a French Heritage site. So, in the future, more conclusive answers may arise, but for now, the Carnac stones remain, inspiring our curiosity.